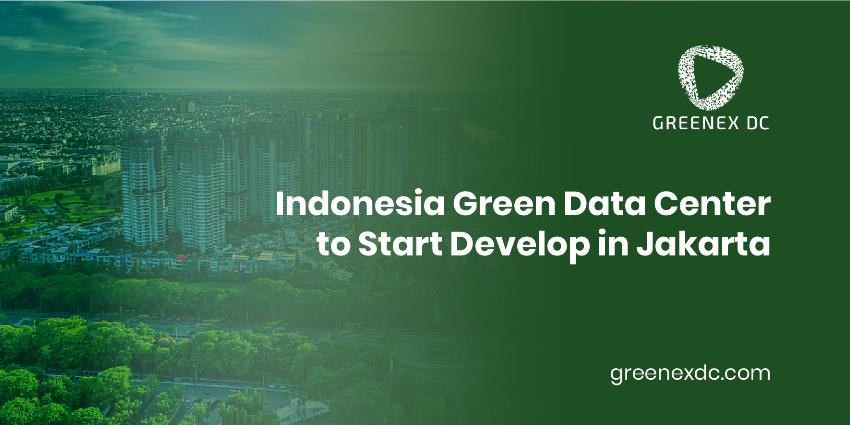 With dramatically increasing digital penetration and transformation, Indonesia needs more than just a data center. The momentum for Indonesia’s green data center is getting clearer. Investors also prioritize ESG in their current investment portfolio. Green data centers in Indonesia has a market size that is quite attractive to venture capitalists.

The location of the data center remains a top priority in developing a green data center. Infrastructure, closer to users, regulations, and government policy support are significant factors in these considerations.

Indonesia, a country with a population of over 250 million, is quickly emerging as a leader in digital transformation. The Ministry of Communication and Information Technology (KOMINFO) has introduced Indonesia Green Data Center Initiative to minimize the carbon footprint and increase the sustainability of data centers in Indonesia.

As one of the coal and oil-producing countries, Indonesia is in the world’s spotlight regarding carbon emissions. All nations agreed to start reducing their carbon footprints.

As we know, data centers account for 2% of carbon emissions. Consequently, data center energy must shift from coal and fuel to cleaner energy sources. An association of data center providers in Indonesia has observed this change, eventually publishing a green data white paper.

Along with reducing carbon footprints, it is expected that the implementation of the GDC Initiative will create more than 1,000 new jobs and attract foreign companies to build their offices in Indonesia.

To answer these challenges, we began to design and implement a carefully crafted plan to build a green data center in Jakarta, Indonesia’s business and administrative center.

There are already several giant data center companies in Jakarta, such as Google, Amazon, and AWS.

Indonesia, with 260 million people, has experienced a reasonably high internet penetration. More than 200 million people in Indonesia have used the internet to support their daily activities.

The proximity of servers to users is one of the factors for business success in the digital era. Therefore, by placing a server in Indonesia – especially in Jakarta – your digital application will be accessed more smoothly by users.

This condition raises the need for a data center in Indonesia that is more environmentally friendly and efficient.

Jakarta is the largest and busiest city in Indonesia, with a population of 10 million. Jakarta has 30 million internet users (based on data from Google and Facebook).

Jakarta is Indonesia’s ICT infrastructure hub, such as IIX and IX. The availability of electricity in Jakarta is abundant, including electricity with natural gas energy sources which can reduce the data center’s carbon emission footprint by up to 50%.

Jakarta’s strategic position as a digital technology hub in Indonesia made us choose this location to set up a data center. GreenexDC has six strategic locations in Jakarta, and we will build a green data center at each of these locations to meet the increasing needs of data centers in Indonesia.

Green data centers use renewable energy sources such as solar panels or fuel cells to power their operations. Furthermore, it works efficiently and does not produce any greenhouse gas emissions or other forms of pollution during its operation process.

The rise of the Indonesia Green Data Center Industry will be at its peak this year as many data center players from Global expand their business to Indonesia. With the growing internet connection in Indonesia and the recent development in the industry, there is a high possibility that most companies need data center services.

The government of Indonesia sees the shift toward green data centers as a way to create jobs and develop the economy. To do so, they have created incentives for businesses to invest in green data centers rather than those of older technology.

As more businesses move into Indonesia, it will become increasingly important for the government to manage its power resources carefully; otherwise, it could experience a series of blackouts due to overloaded electrical infrastructure.

To address this problem, several companies have begun investing in green data centers in Indonesia—data centers designed to use renewable energy sources instead of fossil fuels for their electricity needs.

These companies believe that if they can create green data centers in Indonesia, they will be able to attract more business from American companies—many of which have committed to using only renewable energy in their facilities—to expand their operations into this promising market.

Located on Jalan T.B., Simatupang, South Jakarta, which has strategic access, the first green data center project will be built at this location (next to the Mercure hotel). The GreenexDC expert team has made a master plan to construct an environmentally friendly data center at the location.

It is expected that this Green Data Center will be able to serve every organization in Indonesia for next year. The data center can also serve as an essential hub for global companies with an economic presence in Indonesia, such as North U.S, Western Europe, China, India, Japan, and Korea.

Our initial target in building a green data center in Indonesia is to provide a data center that is environmentally friendly, low-latency, efficient, and has good transparency. GreenexDC will use data center infrastructure management to monitor carbon emissions and energy efficiency.

In addition, GreenexDC has obtained an agreement from a subsidiary of a state-owned company for the supply of gas for data center generators. Thus, GreenexDC can reduce carbon emissions by up to 50% at the start of the data center establishment.

The energy is on—literally. As more companies turn to the cloud for their business operations and store more information technology (IT) resources, organizations are becoming increasingly aware of how their local facilities impact the environment.

The latest trend in the IT industry is moving to green data centers, which use technologies that lower carbon emissions than traditional physical data centers. However, there are several factors to consider when designing a green data center that will reduce the environmental impact without compromising performance or efficiency.

Designing an environmentally friendly facility comes down to three main goals: reduce energy usage, reuse energy waste, and improve IT performance. To meet these goals, power management is a key factor—a smart power distribution unit (PDU) can be used to regulate power consumption levels by shifting from 100% load to 0% load in less than 15 seconds; this prevents excess power from being used unnecessarily and saves money by adjusting to changing workloads.

The key principles are simple:

GreenexDC will continue to innovate on data center efficiency and renewable energy. We have looked at several possibilities to bring renewable energy to our data centers, such as a combination of solar panels and centrifugal wind turbines. In this way, we can produce around 30% of the total electricity needs of the data center.

Because it is efficient, the costs incurred by data center user companies will also be economical. They can rely on GreenexDC as a disaster recovery center or the main operations data center.

Likewise, data center companies in Singapore are experiencing difficulties in data center expansion. Options are always available, and GreenexDC is here to solve some of these problems.