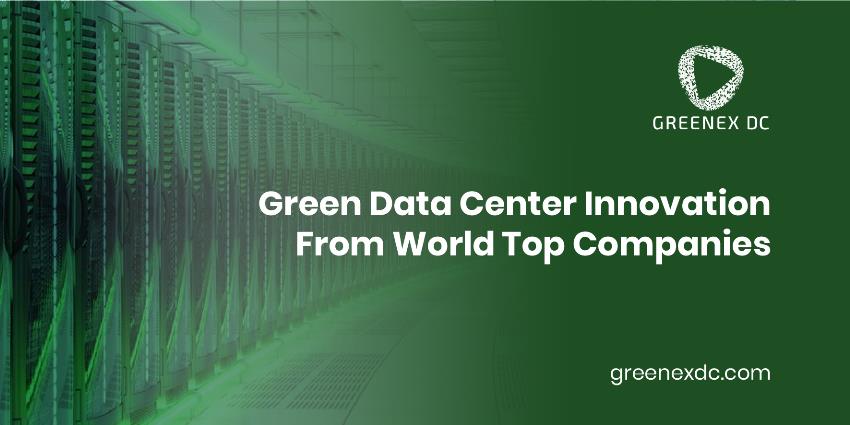 Green Data Center innovation is an important topic facing most Green IT professionals today. Green data centers have been around for quite a while now.

However, their popularity has surged in recent years, and more and more technology companies have started to invest in the concept of green data centers.

In doing so, they have offered new innovative approaches beyond building a typical green data center up from scratch.

Microsoft has been experimenting with innovative ways of cooling data centers, including immersion cooling and air-side economization. Immersion cooling takes advantage of the fact that water is a more efficient heat transfer medium than air.

By submerging servers in a tank filled with mineral oil, Microsoft can cool them more efficiently than traditional air-side economization methods.

Air-side economization uses outside air to cool the data center’s equipment by blowing it over cold surfaces; this process requires much energy to run the fans necessary to drive the airflow.

The company claims its immersive cooling system is three times more energy-efficient than traditional methods. It also offers other advantages, such as reduced noise levels and better performance in hot climates.

Cisco Systems is expanding its data center footprint with a new facility in Texas that will have a smaller carbon footprint than other facilities in the company’s portfolio.

The facility will be powered by 100 percent renewable energy and will recycle the heat produced by the servers for use in heating water for offices and bathrooms.

The system is expected to reduce energy consumption by more than 20 percent and reduce carbon emissions by one million pounds per year.

The system uses electrically conductive liquids to transfer heat from microprocessors and servers into a tank filled with glycols (a mixture of propylene glycol and water).

The system then pumps out hot water that runs through tubes inside the building’s walls before returning to the tank.

Google has developed a modular data center design that allows easy deployment and scalability. This design includes a containerized modular system with racks and servers that can be easily installed on-site.

The containers are connected via fiber optic cable and can be expanded or contracted as needed to meet the company’s needs.

The company says these containers can be installed in just ten days, allowing for quick deployment of new sites and the rapid expansion of existing ones. It also allows for more efficient cooling than traditional designs since the containers are smaller than conventional data centers.

In addition, Google has invested $2 billion in renewable energy projects worldwide to power its data centers and offices. The company plans to invest an additional $3 billion over the next five years to purchase more renewables from wind and solar farms.

Apple has been at the forefront of green data center innovation, with its Apple Park campus being built to LEED Platinum specifications and using 100% renewable energy. But it’s not just about Apple’s corporate facilities; the company is also partnering with Green Mountain Power in Vermont to deliver a 100% renewable energy supply for Apple’s iCloud services.

Amazon is one of the largest cloud service providers in the world. The company’s data centers are located in 10 different regions across the globe, including Oregon, Ireland, Singapore, Indonesia, and Japan. Amazon uses a variety of applications to run its business and processes trillions of transactions each year.

This approach reduces energy use by 90% compared to traditional approaches used by most companies today.

Adobe Systems uses a patented advanced chiller technology to cool its data center operations. The company has developed a water-cooled chiller that uses less energy than traditional chillers and requires no additional water pumping or other infrastructure changes.

The system uses a closed-loop system, and the water circulates through small tubes through each rack of equipment. The tube water is cooled by passing through a heat exchanger, which transfers heat from the hot air in the data center to the cold water in the tubes.

This process keeps the air cool while keeping costs down as well. The company says this approach reduces energy use by 40 percent compared to traditional refrigeration systems, which rely on refrigerant.

The eBay facility features a two-megawatt solar array. It encompasses approximately 80 acres of land with more than 300,000 square feet of space dedicated to serving eBay’s global business needs, including technical support functions such as software development, testing, and operations, as well as disaster recovery capabilities for our platform services such as PayPal, Skype, and StubHub.

A MaxiScale platform powers eBay’s new facility. The company will use this facility to support its growing need for capacity. eBay has also been working to reduce its energy consumption by 50 percent, which will help it meet its goal of becoming carbon neutral by 2020.

The new facility will be powered by a MaxiScale platform designed to be up to 80 percent more efficient than traditional data center architectures. The solution helps companies save money by reducing the resources needed for cooling, power distribution, and backup power generation.

HP’s Cooling Pod is a multi-function data center that can be deployed near a source of cold water. It uses that free cooling to push down energy costs by 20%. The pods can also be used as disaster recovery sites or closed facilities for sensitive research.

Hewlett-Packard is not alone in trying out this kind of technology. Microsoft has also experimented with similar methods to cool down its data centers. However, it has not yet released any results about whether it works better than traditional air conditioning systems.

What should we ask ourselves to continue the improvement?

When our data center is becoming more and more critical to business, we’re also finding it increasingly difficult to keep up with the innovations in the industry.

With this project, we’ll be looking at how data centers innovate and what they do to stay as progressive as possible. We’ll also look at how these innovations are applied to real-life data centers by interviewing professionals at top companies in the industry and evaluating some existing facilities ourselves.

The efforts come as more companies adopt cloud computing services that store data on remote servers rather than on-site equipment. That shift has created a growing demand for data centers, which are power-hungry facilities that typically consume tens of megawatts of electricity per facility.

Data centers are the backbone of today’s digital economy. They are responsible for keeping all of our information safe and secure and powering our services, apps, and business processes. But these facilities are not only massive electricity consumers; they also account for a significant portion of the world’s carbon emissions.

Many companies are pursuing green strategies because they want to be good corporate citizens or because it’s good for business.

Companies that use renewable energy can often lower their operating costs over time because they don’t have to pay as much for electricity or cooling systems. That helps them cut expenses and turn a profit faster.

We’re seeing companies like Google and Microsoft, who have traditionally been on the leading edge concerning green data center innovation.

With their investments, they’re providing the blueprint for other smaller companies to follow suit. As a result, the next generation of large data centers will be greener, more efficient, and more sustainable thanks to the influence of these top companies.