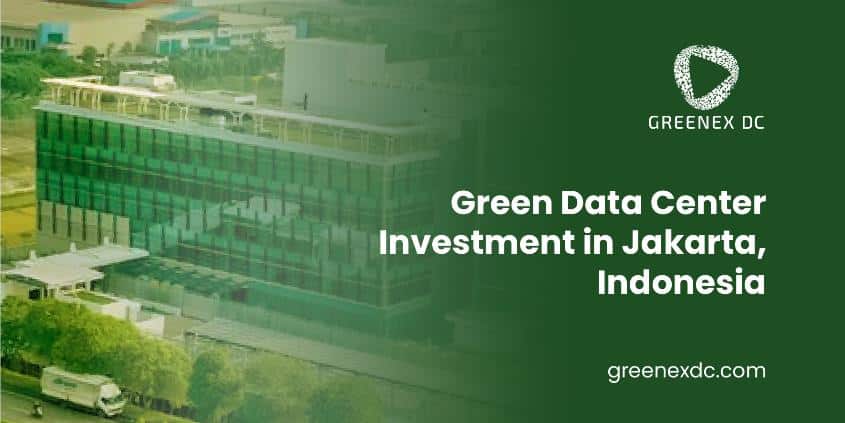 Green Data Center Investment in Jakarta, Indonesia, is next to enter a new era of clean and green data center investments.

As a large part of the world’s population wakes up to the possibilities of making savings by greening their businesses, many data centers are stepping into the green data center market.

Jakarta’s ability to attract investment and its large talent pool has made the city a magnet for data center operators from around the region.

It’s well situated between virtually all of the other markets in Southeast Asia, and we don’t foresee any reason why this will change anytime soon.

The growth opportunities in retail sectors and the increase in the Digital Economy have provided strong momentum for the data center market. Jakarta is one of the largest traffic markets globally, providing a significant opportunity to operationalize servers and rack space within a data center.

It will reach approximately 2% and 3% by 2017. Between 2016 & 2017, the electricity demand of all data centers over 10 KW is expected to grow by between 236 and 405 MW. Further demand already constrained supply capacities across Indonesia.

Global organizations are facing a common challenge: reversing their data center’s negative environmental trend of high energy consumption. Microsoft’s intention to be carbon negative by 2030 has led companies to re-evaluate their green methodology.

Today’s Green Data Center Investment is a “best effort” to protect the environment and a crucial business-critical endeavour.

With that in mind, let’s look at some developments regarding the Green data center’s investments in Jakarta to ensure power effectiveness.

With over 185M internet users, Indonesia is undoubtedly one of the biggest online markets globally. In July 2020, online penetration here stood at over 68%.

As a result of popular online activities, such as mobile messaging and social media, the rise of the data center market in Indonesia is rapidly multiplying.

Hawkins says that Asia and South Asia are two fast-growing digital economies. He is right. The GSMA noted that the Indonesian economy is set to expand by $10.5 billion over the next decade, adding 1% to the country’s GDP by 2030.

“When you look at the market size, they only have around 50% penetration of mobile phone users, compared to Europe, which is close to around 90%. There is a lot for growth in data center demand throughout the region,” he says.

Hawkins says there is not a lot concerning the capacity in Indonesia. There is under 100Megawatt generally in Jakarta, which presented itself as a great chance for SpaceDC to expand in the market.

Jakarta is our first data center to come out of the gates. The region consists of one of the highest populations of internet users. Jakarta has a lot of internet penetration potential, and we see a lot of growth still coming.

“Jakarta has a vital start-up culture, which coupled with Amazon, Alibaba, and Google coming into the market, does credential the city as the next growth zone, and it can be the next digital powerhouse of Asia.”

“Usually in most Asian countries, the telcos influence the data center space, as they were familiar in countries such as America & Australia 10-20 years ago. But now in other countries, you have data center providers that do just that & the telcos focus on additional mobile related services or their networks.”

“As we progress forwards with 5G, there is going to be pressure on the network providers to construct better networks & services & shift their focus away from building data centers,” he continues.

“That will enable more data center providers to come in and pick up the pieces. You will soon see a transfer from telcos providing these services to specialist providers.”

What makes SpaceDC’s data center even more energy efficient and resilient is its use of onsite gas generators. It doesn’t rely on the local electric grid as a power source (the traditional energy source for most Indonesian data centers).

The onsite gas generator setup at SpaceDC’s campus will suffer no distribution losses. It does not need to transmit electricity over long distances.

On top of that, the data center can recycle waste heat from the gas generators by passing it through a heat exchanger in the absorption chillers. It produces more chilled water for its Cold Room Air Conditioners, which cools down the data center halls.

SpaceDC is one of the first Indonesian data center providers to employ the Selective Catalytic Reduction system to reduce the carbon footprint of its diesel generators. It is one of the many green design features of the ID01 campus.

“We are working out how we can provide infrastructure for international companies to expand into Indonesia. We are also looking into different energy sources. We are currently exploring some options to provide green energy for the data centers to bypass the carbon-based approach altogether,” Hawkins concludes.

“We are headquartered in Singapore, which has a stable and reliable government system. Many international companies can contract with us here with the assurance of common law, good trade, and safe travel.

The main problem faced by data center providers in Singapore is the limitation of data center expansion and gas supply.

“We effectively branch out from Singapore and run and operate data centers for customers here, which gives a lot of reliability from a supply-chain perspective.

“Instead of a customer renting from one data center supplier in Vietnam and a different one in Korea, they can come to us. Our focus is to provide a one-stop-shop for people across that region.”

SpaceDC plans to build two data centers in Jakarta, the Indonesian capital city, to house the JAK2 facility. A larger data center, JAK1, with a 24MW capacity, is currently under development.

Many businesses and other establishments have shifted to “green data center” facilities in the last decade. A data center is called a green data center when it is built to be environmentally friendly by reducing its carbon footprint.

Businesses that utilize green data centers can increase their outdoor visibility, save operational costs, and even gain a competitive advantage over rival businesses.

Jakarta is Indonesia’s economic capital. By 2040, Jakarta is predicted to become the world’s fourth largest city. Its massive population causes power consumption to grow at nearly 6% per annum.

Jakarta’s data center space is relatively limited. It is because most data centers are still located in business districts and require dedicated setups for each tenant.

However, for few markets, these Green data center investments can lay the foundation for the following purposes:

To address the first issue for data center growth in Indonesia and Jakarta, reliable power sources need to be available. The long-term solution requires the construction of a mega hub data center which will be fully supported by the PLN grid there.

The World Bank expects Indonesia to grow by over 6.7% CAGR during the forecast period. Rising investments and increasing energy consumption are the key factors driving market growth.

The most prominent players in the data centers industry, such as NTT Communications, Amazon Web Services, Digital Realty, and Equinix, are investing in Indonesia. This is an indicator that Indonesia is a prime destination for data centers in the region.

The current interest in developing data center facilities in Indonesia is conflicting but encouraging. There are strong indicators that government and investors will be interested to see how the future of the Indonesian data center industry plays out.