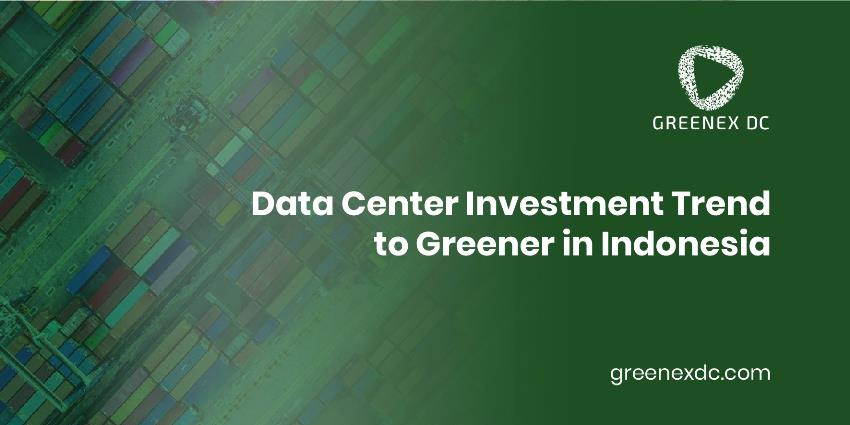 Data center investment in Indonesia will shift in favor of green data centers due to the government requiring the utilization of renewable energy and the increased need for sustainable infrastructure.

It’s estimated that 70 percent of upcoming data center projects in Indonesia will be built using green technology. This trend is greatly influenced by the government’s policy to promote renewable energy, and this trend can also be seen in other ASEAN countries such as Malaysia, Thailand, and Vietnam.

The Rise of Data Center Investment in Indonesia

According to a recent report from the latest research, the data center market in Indonesia is expected to grow by a whopping $400 million in 2027, a growth rate of over 5% annually.

The good news for Indonesia is that it’s becoming one of the global hot spots for data center investment. That may sound like bad news for anyone concerned about the environment and sustainability, but data centers are being built with greener technology than ever before.

It means that not only are server farms more efficient, but they’re creating less environmental harm than ever before, too. So what does this mean? It means that while Indonesia will become a powerhouse regarding technological progress and data storage capacity, it will also take steps toward being an eco-friendly nation.

Indonesia’s rise will be primarily driven by infrastructure, increased internet users, and the growing need for data storage capabilities.

Indonesia’s infrastructure is improving, which means it can support more data centers.

Data communication networks such as satellite, terrestrial and optical fiber will be completed in 2021. The Indonesian government has also committed to supplying natural gas to the data center industry to reduce carbon emissions by 50%.

Currently, the Indonesian government is building a power plant sourced from renewable energy. Thus, in 2050 Indonesia will achieve net-zero emissions, at least in the data center industry.

With the improvement of telecommunications infrastructure in Indonesia, penetration in Indonesia has reached 80% of the total population. In 2022, internet users in Indonesia have reached 205 million users.

Internet users in Indonesia, on average, use the internet for 4 hours per day (based on a survey from the Association of Indonesian Internet Service Providers or APJII). This condition will require a larger data storage space in the future.

The growing need for data storage capabilities in the country has been a major contributing factor in the rise of Indonesia’s data center business. The rising demand from the government and private sectors, as well as foreign investors, has been fueling this growth.

Culturally, Indonesians are very family-oriented; this fits right into why they use social media so prolifically—it allows them to stay connected with their friends and family who live in other parts of the country or overseas.

The fact that they communicate across great distances also translates into a desire to access information from anywhere at any time and need more cloud-based apps that can easily sync across multiple devices. It means more data storage will be required to meet the needs of mobile devices and all those apps!

By understanding the Data Center investments in Indonesia, you can gain a broader understanding of how the digital economy is progressing across the globe. As one of the fastest-growing economies, Indonesia’s digital market has a lot to offer Western tech companies.

With roughly 260 Million people living in Indonesia with an ever-growing technology market, companies are investing heavily in data centers. Large corporations like Microsoft, Oracle, and IBM have already set up shop here, along with many local players taking advantage of this new wave of technology.

With such a vast market, businesses flock to Indonesia to seize the untapped opportunities. Data Centers have been seen as a crucial part of helping companies tap into the Indonesian market. However, as the demand for Data Centers grows in Indonesia, so does its need for greener solutions that don’t deplete its natural resources.

Data Centers are crucial parts of digital transformation, and investment trends show this will only continue. If you’re considering investing in Data Centers, now is an excellent time to take advantage of current trends, especially in Indonesia.

Green data center infrastructure has recently been on the rise in Indonesia, as some of the world’s largest data center operators have committed to building new facilities that will help save energy and reduce their carbon footprint.

These companies are investing in cutting-edge technology that can help them monitor and control their energy usage, a trend being seen worldwide. The cost of electricity in Indonesia has remained relatively high, so this efficiency investment leads to lower costs for data center operators, allowing them to save money while becoming more environmentally friendly.

In addition to helping data center providers save costs, a greener data center could also help attract new businesses to Indonesia that are looking for a place with affordable electricity and low greenhouse gas emissions.

Investment needs to be shifted to more sustainable sources of green energy.

The need to shift the investment into a more sustainable source of green energy is growing ever more vital in Indonesia. The country’s high demand for electricity has resulted in its dependence on coal-fired power plants, resulting in one of the highest carbon emissions rates in the world.

According to estimates, Indonesia’s CO emissions will be equivalent to about 900 million tons by 2020, an increase of 38 percent from 2004. With statistics like these, Indonesia could potentially become the fifth most significant contributor to global warming.

The rising energy cost is unavoidable in the modern world, and businesses are no exception. With the growing global demand for environmental-friendlier forms of energy, the investment toward greener data centers must be made—and in Indonesia, the potential for a great return on this investment is ripe.

A recent report released by the United Nations Environment Programme (UNEP) states that Indonesia ranks second in the world in terms of potential for geothermal energy and seventh in the potential for solar power, making it a prime location to shift investment away from coal and fossil fuels toward more sustainable sources. Indonesia’s abundant natural resources make renewable energy a real option.

It was reported earlier this year that many of Indonesia’s newly built data centers are already using renewable energy sources—which is encouraging news since this indicates that there will be plenty of options for companies looking to make a change.

The nation’s capital, Jakarta, has been named one of the top cities in the world for investment in green data centers.

This is large because of policies implemented by Indonesia’s Ministry of Industry and Trade, which include tax incentives for businesses involved in building and operating green data centers, as well as regulations that require all new buildings to have high-efficiency standards set by the Energy Conservation Building Code (IECB).

Read also: Indonesia will be a Global Leader in Green Data Center

Data centers must use energy-efficiency solutions.

In data centers, servers and storage systems generate much heat. Up to 70% of the total energy consumed in a data center goes to cooling. So companies must find ways to reduce their carbon footprint while also improving their bottom line.

Innovative companies have begun using virtualization technology to reduce the physical space required for computer systems by more than 50%. Virtualization enables multiple systems, or “virtual machines,” to run on one physical system.

This reduces the number of physical systems that need to be maintained, which reduces the amount of space required in a data center. Because less infrastructure is needed, companies can scale down their data centers, saving money and resources.

With a growing demand for more sustainable and environmentally friendly solutions, there is no doubt that the green solutions market will continue its growth in the years to come. With this in mind, we expect that the technology industry will continue its investment in the Indonesian data center infrastructure, both from an infrastructure standpoint and an investment standpoint.

Data centers are already a significant part of Java’s economy today—in fact, as much as 75% of Indonesia’s IT industry is located in Java alone—and they will only continue to grow as more companies begin adopting cloud technologies.

More and more companies in Indonesia are now turning to the use of green data center solutions to help minimize their carbon footprint.