Data Center Energy and its Impact on Climate Change 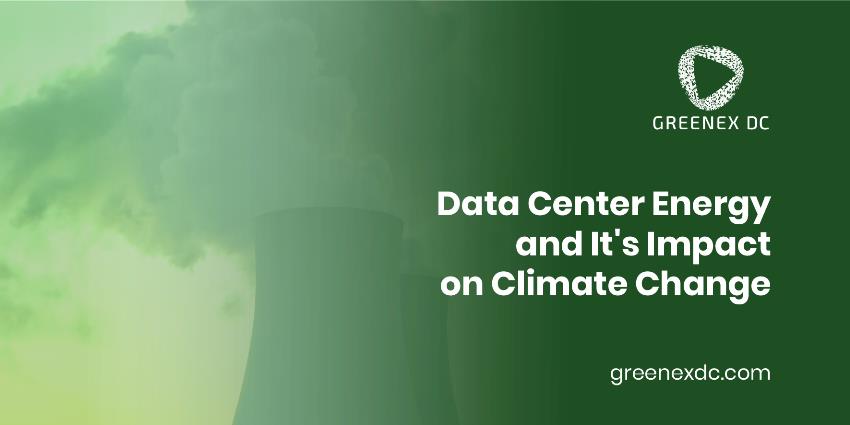 This article will focus primarily on the impacts of data center energy usage on global warming and climate change. We will also provide tips to make your data center more environmentally friendly and carbon neutral.

Many other efficiency innovations help data centers in optimizing their energy usage. It is such virtualization software-defined, air flow and any other techniques.

Data centers have been around for decades and have grown exponentially since the internet became mainstream. They’re responsible for about 2 percent of global electricity use and 2 percent of CO2 emissions from electricity production.

A typical data center uses about 200 kilowatts (kW) per rack — enough electricity to power 60 homes — while an efficient facility might use just 50 kW per rack.

In addition to their impact on climate change, data centers require large amounts of water for cooling purposes — an average of 2.4 gallons per kilowatt hour (kWh) — which can strain local water supplies during periods of drought or high demand when other industrial users need access to water as well.

Data centers emit greenhouse gases due to their high energy usage; however, there are other ways in which data centers contribute to climate change.

In 2010, data center energy consumption was 8 billion kWh, or about 5% of all electricity used in the U.S. According to a report from The Green Grid (TG). By 2020, that number could reach 20 billion kWh per year—if we do nothing more than maintain current growth trends.

Data centers use power at an average rate of 1.5 megawatts (MW), which means they consume enough electricity each year to power more than 700,000 homes in the United States, according to TG’s report on data center efficiency opportunities:

“The largest electricity users are commercial office buildings where computers are used for various applications such as accounting systems and payroll services. However, most people would not consider these uses typical office activities.”

Data center electricity consumption accounts for 60-70% of the total cost of ownership, so reducing energy usage can be a significant driver for cost savings.

Greenpeace International’s Cool IT initiative aims to reduce data center carbon emissions by 50% by 2025: “A typical 1 MW server room requires 1 MW of power from the grid during peak usage periods (roughly 6 hours per day). This means that a company with 2,000 servers would use around 3 MWh of power each day – equivalent to burning over 100 gallons (400 liters) of diesel fuel.”

To combat this issue, many companies have begun using renewable energy sources such as solar panels or wind turbines to power their cooling systems. This way, they can reduce their carbon footprint while ensuring that their data centers are operating at peak performance levels at all times!

Datacenter’s carbon footprint is one of the most significant contributors to climate change. It accounts for 2% of global greenhouse gas emissions and is expected to grow significantly in the next few years as more data centers are being built and used worldwide.

Data centers have been around for decades, but they have only recently become popular because of the growth of cloud computing and online services. There are over 5 million data centers worldwide, and more than 30,000 new ones are being built yearly.

The average energy consumed per megawatt-hour by a data center has doubled over the past decade, It is expected to double again within the next five years. This increase is because servers are becoming more powerful and require more electricity to run their cooling systems at optimum performance levels.

How heat is generated inside a data center depends on its design and how much power it needs to operate efficiently. Considering how much energy it takes to cool down servers when they’re running at full speed, you’ll understand why many companies want to invest in newer technologies that can help them reduce their carbon footprint.

However, these efforts will only get you so far — eventually, you’ll hit a wall where no further savings can be realized without some fundamental change in how data centers operate.

Data centers’ impact on climate change is significant because they consume so much energy. And as cloud computing becomes more popular and companies store more data online. We can expect these numbers to increase even more.

It’s estimated that by 2020 there will be an additional 35 million servers in use worldwide — which means an increase of over 50% from today’s level.

The good news is that there are many ways that data center operators can reduce their carbon footprint and help reduce global warming while maintaining high uptime and performance for their customers. One way they’re doing this is through Next-generation data center designs.

The next-generation data center (NGDC) will be built on a foundation of renewable energy, using highly efficient and sustainable technology. It will be powered by clean electricity from solar panels, wind farms, or other renewable sources.

A key trend in next-generation data centers is moving from traditional models built around physical infrastructure to software-defined technologies.

Software-defined infrastructures allow you to create virtual networks over which applications can run. This enables you to manage your infrastructure easily and increases automation and efficiency.

NGDCs will use energy-efficient design principles such as a high-density layout, high-performance cooling systems, and advanced power management systems to reduce their overall energy footprint. They will also take advantage of proven technologies for renewable energy generation, such as rooftop solar panels, wind turbines, and geothermal plants.

The challenge for next-generation data centers is to provide more power and connectivity while using less energy and being more sustainable. This requires a new approach from vendors and customers, emphasizing efficiency and sustainability.

Carbon neutrality is achieved when an entity offsets the carbon emissions from its operations by purchasing credits from an accredited carbon offset provider.

Carbon offsets are certificates that allow organizations to compensate for the greenhouse gases they emit into the atmosphere by funding projects that reduce emissions elsewhere. These can include renewable energy projects or reforestation initiatives, for example.

A carbon-neutral data center uses renewable energy sources to power its operations. That means it does not produce carbon dioxide emissions when it runs, which means it’s carbon neutral. The goal of these types of data centers is to use as little energy as possible while still having the ability to run efficiently and effectively.

Carbon-neutral data centers rely on renewable energy sources such as solar panels or wind turbines to achieve this goal. These sources provide clean energy that doesn’t impact climate change or the environment.

The most common type of renewable energy used in these types of facilities is solar power because it’s relatively cheap and easy to set up on rooftops or other areas around a building where there’s plenty of sunlight available throughout the day and year-round.

The Uptime Institute’s (Uptime) latest survey of data center providers found that about 20 percent of respondents have implemented a carbon-neutral strategy, and another 20 percent plan to do so within the next two years.

Climate change is a global problem with worldwide implications. It’s predicted that by the end of this century, the earth’s average temperature will increase by 2°C, and the sea level will rise by 20cm.

The impact of climate change on our planet is so severe that it has prompted governments to take action against it. The Paris Agreement was signed in 2015 to limit global temperature rise to below 2°C above pre-industrial levels. But how do we achieve this?

Data centers are responsible for an estimated 2% of global greenhouse gas emissions – but they could play an essential role in helping us meet our climate goals.

Achieving carbon neutrality is an ongoing process as you work to reduce your emissions and improve your energy efficiency over time.

In this age of global warming, energy efficiency is paramount in the design of modern data centers. The concept of a carbon-neutral data center has emerged to address this issue.