Why We Must Reduce Data Center CO2 Emissions From Now 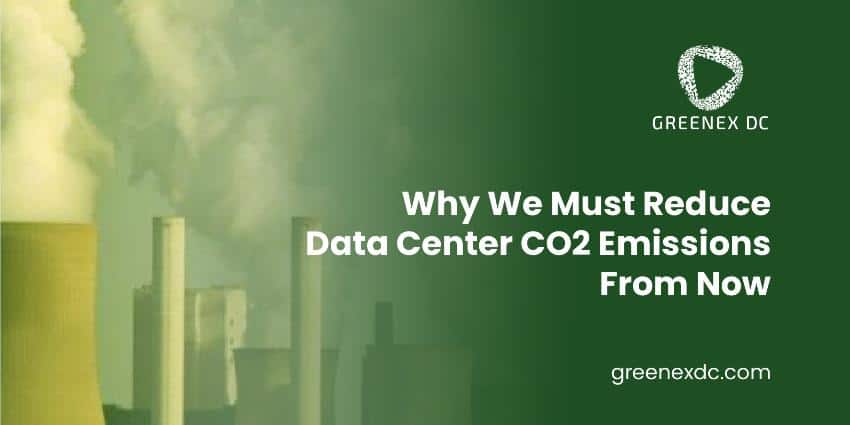 Data Center CO2 emissions are growing at an alarming rate. According to a recent report by the Uptime Institute in 2020, data center electricity consumption is rising at an annual rate of 10 percent.

That means that it takes more energy to power our data centers and servers than it does to power all of the homes in all but six countries worldwide.

This wastefulness makes it difficult to meet aggressive carbon reduction targets set forth by organizations like The Green Grid or the EPA’s Climate Leaders program.

What are the impacts data center CO2 emissions?

The average surface temperature of Earth has increased by 1.8°F (1.0°C) since 1901; 16 of the 17 warmest years have occurred since 2001; and global average sea level has risen by 7-8 inches since 1900, which is enough to cause significant erosion along coasts and wetlands.

If we don’t act soon, scientists say there will be catastrophic effects to our planet’s ecosystems and natural resources, including widespread food shortages and widespread water scarcity due to drought conditions in many parts of the world.

The reason data centers produce so much CO2 is that they require significant amounts of electricity to operate their cooling systems.

The amount varies depending on the size and design of the facility and other factors, but it can be as much as 15 million watts per server — far more than most commercial buildings use per occupant.

The average data center emits over 1 million pounds of carbon dioxide into the atmosphere every year. This is equivalent to burning 15 million gallons of gasoline or driving over 60 billion miles in an SUV!

Some studies in 2020 estimate that, data centers accounted for nearly 3% of global carbon emissions — more than aviation.

How can we reduce data centers carbon emission?

A recent study by the Uptime Institute and IDC found that the average amount of power consumed by a data center increased from 1.5 megawatts to 2.5 megawatts in just six years’ time – that’s an increase of over 50%. In addition to this, there was a 10% increase in CO2 emissions during the same time period.

The good news is that there are many ways you can reduce your organization’s carbon footprint by reducing energy consumption at your data center site or by shifting your operations to renewable energy sources.

The major sources of data center energy consumption include:

Cooling: Air-conditioning systems account for about 25% of total data center energy consumption in large facilities with hundreds or thousands of servers and other IT equipment packed into a single room or building.

Some newer designs feature more efficient cooling systems that use outside air, which requires less energy than traditional air conditioning systems that recycle hot air inside the building through an HVAC system and then vent it outside through exhaust stacks on rooftops or another side of the building.

Are there any obstacles to reducing CO2 from data centers?

The second obstacle is that it’s difficult to change the energy mix of an entire country overnight. For example, if you want to make a big dent in CO2 emissions, you will need to replace coal with natural gas or nuclear power. But these options are not available everywhere — in fact, they’re not available at all in Germany or Japan for political reasons.

The third obstacle is that there’s no easy way to measure how much CO2 a data center emits because it’s so hard to know exactly how much energy each server uses when it’s on and offline (most data centers only measure their electricity use when servers are running).

The fourth obstacle is that many companies use renewable energy sources to power their data centers, but not all of them do so on a large scale.

The good news is that there are a number of promising technologies already available to reduce the carbon footprint of data centers. Many of these technologies have not yet been implemented at scale.

U.S. data centers are projected to consume approximately 73 billion kWh in 2020.  (Source: How much energy do data centers consume? (techtarget.com)). The most obvious opportunity for reducing heat is to use more efficient cooling systems.

The following are some of the ways you can reduce your data center CO2 emissions:

Use energy-efficient servers and storage hardware.

If your servers or storage hardware are not energy-efficient, they will consume more power than necessary. This will increase the amount of electricity your data center consumes and increase your carbon footprint as well.

To reduce this problem, use newer models of servers and storage hardware that consume less power while doing the same tasks.

If natural gas is available to you at a competitive price, it is likely to be your best energy option for a data center. Using less coal and oil for electricity generation can also reduce greenhouse gas emissions.

Powering a data center with natural gas instead of coal can save up to 30% on energy costs and reduce CO2 emissions by 50%.

If there is enough supply of natural gas near your data center location or at least within a reasonable distance, then you should use this option.

Use renewable energy sources such as solar energy or wind power.

By using renewable energy sources to power your data centers, you can reduce your carbon footprint significantly over time due to their reduced dependence on fossil fuels for their power needs.

You may also be able to get a tax break for using these types of energy sources in certain areas due to government incentives provided for them in recent years.

Use natural cooling systems instead of air conditioning systems whenever possible.

In a data center, the cooling strategy is one of the most important aspects of design and construction. The cooling system in the facility must be able to handle all of the equipment in the facility, plus any additional power that might be added later.

The most common cooling systems in use today rely on water and evaporation, which means they require a lot of water (and thus energy) and waste it as hot water vapor into the atmosphere.

Natural cooling systems rely on environmental conditions to regulate the temperature inside your data center.

Once you’ve installed these systems, there’s no need for a separate HVAC system. They’re also more efficient than traditional data center cooling methods because they don’t consume as much electricity or water.

By using cooling systems that rely on natural elements like water, evaporation, and wind, your company can implement a more environmentally friendly data center infrastructure.

The needs of people in the era of digital transformation require a data center to process and store data. According to The Uptime Institute, Bitcoin mining requires electricity equivalent to the needs of 20 million UK households.

Of course, this causes the need for electricity in the data center also continue to increase. Then, this leads to a potential increase in data center CO2 emissions that could lead to climate change.

If you add up all the energy used by all the data centers in the world, it’s estimated that they account for 2 percent of global CO2 emissions. That’s as much as Germany’s entire power production.

The world’s data centers emit about 3 billion tons of carbon dioxide each year — about 2% of all global emissions. Data centers are fast becoming one of the biggest contributors to the planet’s carbon footprint.

If we don’t act now, data center CO2 emissions are projected to double by 2025!.

But there are ways we can reduce these emissions. This industry has been taking steps to reduce its environmental impact.

We’ve been working to build the largest and most advanced data center in Indonesia. To provide reliable and superior technical services for businesses and consumers in this region.

The infrastructure for our new data center in Jakarta comes with an energy-efficient design, which will save us a lot of money on operational expenses.

As you can see above, there are some key questions to ask before signing on the dotted line. The bottom line is that green data centers can be influential investments.