Why is Green Data Center the Answer to Environmental Issues? 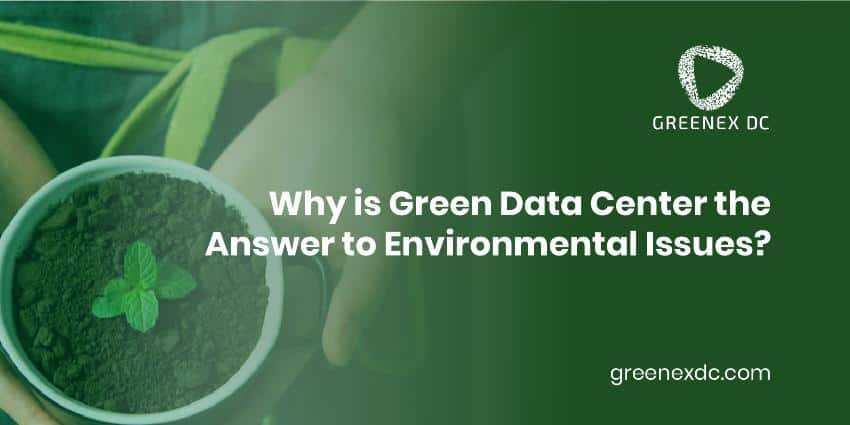 The environment is a topic that is increasingly being considered by the world’s decision-makers. We are constantly searching for ways to reduce our carbon footprint and make the world a better place overall. With the emergence of the green data center, businesses are finding new opportunities to reduce their footprint, increase profits, and provide top-notch services to their clients.

Many enterprises are committed to green data center design, which has been encouraged by the government and themselves.

Several environmental impacts are associated with a data center. The first is the power required to run the server and its support equipment. Data centers use more electricity than any other industry in the United States, which can negatively affect the environment.

The most significant impact comes from the power that is used. These high-powered machines require a steady stream of electricity from large generators that release greenhouse gases into the atmosphere. While technologies are being developed to make data centers more environmentally friendly, these advances have yet to be widely implemented.

Data centers can also impact the environment by powering their support equipment, cooling their facilities, and transporting materials to and from them. These elements of data centers should be considered when looking at their environmental impacts.

Datacenter carbon emissions are on the rise and growing rapidly. To reduce environmental impact, data centers must significantly reduce their carbon footprint.

According to the EPA, the servers and devices within a data center require energy to power and keep cool, generating approximately 2% of all US greenhouse gas emissions.

Data centers typically use large amounts of electricity to power their servers, but the amount of electricity that a data center uses can vary depending on the type of servers it uses, its cooling methods, and other factors.

A data center uses a lot of electricity to keep its servers temperature at an ideal state. The servers run hot, so they have to be cooled using large fans or air conditioning units that use a lot of energy. Because they use so much energy, traditional data centers also require a lot of space which means they must be built near power plants or coal mines that give off a lot of pollution.

To reduce their carbon footprint, many companies are turning to newer forms of server cooling systems, such as chilled water or air cooling. Chilled water systems use pipes connected to a water source—such as a river or lake—to cool the air in the data center before releasing it outside.

The United States Department of Energy (DOE) has identified several key areas to focus on, including:

Green Power: The DOE’s report recommends that data centers use as much green energy as possible and outlines specific guidelines for achieving this.

Green Buildings: Another issue that the DOE report touches on is the efficiency of building design itself. Data centers represent a significant portion of the energy consumption of a building, so making the most out of the design can significantly reduce overall energy usage.

Green IT: This relatively new area was not an issue when many of today’s data centers were built. Green IT refers to using ‘green’ or environmentally-friendly technology in data centers. This includes initiatives like recycling, reusing, and reducing dependence on hazardous materials.

While traditional data centers consume a lot of energy, green data centers are designed to be very efficient. The reason behind the enormous amount of energy consumption is simple: data centers are used to process large amounts of information, which in turn requires a great deal of electricity.

Many enterprises have started using greener methods to reduce the energy their facilities need and thus help preserve the environment for future generations.

Data centers can be classified as either green or traditional. Traditional ones have been around for over a decade. They use standard servers and racks with a life expectancy of five years or less.

They could be more efficient at processing power because they need a proper cooling system. This leads to overheating, which in turn causes components to burn out faster than usual.

Due to rising energy costs and increased computing demands, many data center providers are looking for ways to reduce their energy usage without sacrificing performance or uptime.

The Uptime Institute estimates that by adopting more efficient practices and switching to more sustainable measures, data centers could reduce their carbon footprint by 50 percent while saving an estimated 13 billion dollars a year, equating to a net savings of over $1 million a day.

For now, the most likely energy source to lower the carbon footprint in the data center is natural gas. Gas-fired power plants can reduce carbon emissions by up to 50%. Unfortunately, European countries are experiencing energy shortages due to supply disruptions through the Gazprom pipeline.

Even so, renewable energy sources must still be cultivated as the main generator in the data center.

The energy consumption of traditional data centers is snowballing and has become a top concern. To further complicate matters, there are increasing legislative and customer requirements on carbon emissions, and sustainability has become more critical than ever.

Greening the existing data centers, which represent more than 90% of all data centers, is not only a matter of cost reduction but also a step to meet customers’ and nations’ sustainability requirements.

One of the best ways to green the data center is to design it based on virtualization and cloud computing concepts. If a customer wants to relocate or replace the old data center with a new one, it will be much easier to build a green data center from scratch than to try and green an existing one. Although it might have been possible,

it would have required much effort and money, which could have been avoided by simply building a new green data center from scratch.

Green data centers should be designed for efficiency, reliability, flexibility, and cost-effectiveness. It should also support environmental goals such as zero carbon emissions.

The building should have the latest cooling systems and the most efficient power distribution system to reduce the number of heat produced in each room.

These days, many businesses are choosing to invest in facilities certified as LEED (Leadership in Energy and Environmental Design) or Green Energy certified—this shows that they’re making an effort to reduce their carbon footprint.

As our digital lives have become increasingly centered around technology, data centers have become an essential part of our society.

Although they’re critical to all our online activities, they’re not typically considered a common pollution or energy use source. But they are, and there are ways to make them greener.

The environmental impact of a data center is significant, especially as they grow ever more powerful. The three key issues are their power consumption, the physical space required to house them, and the need for cooling.

Green data centers also utilize renewable energy sources such as solar panels and wind turbines. In addition to reducing costs and emissions, this technology provides direct financial benefits such as tax credits or rebates for companies that utilize it.

Data center energy efficiency is essential because it can influence how much energy a facility consumes, how much power it draws from the grid, and how much greenhouse gas it emits into the air. The amount of CO2 a data center emits depends significantly on its design and operation, but carbon emissions always increase with added electricity use and server heat generation.