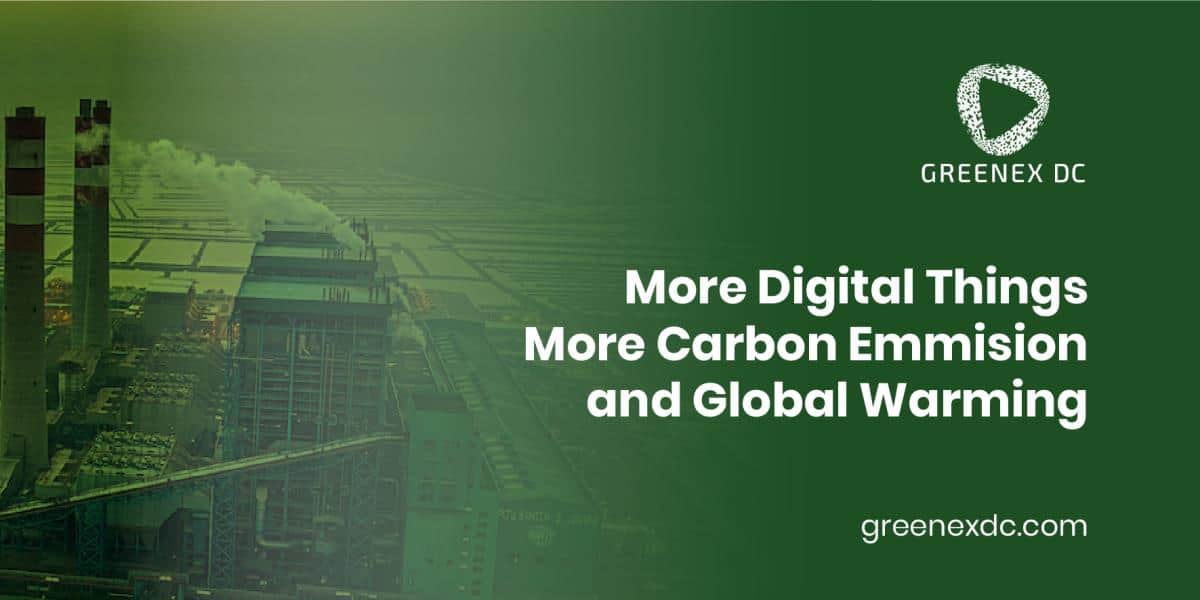 More digital things (like smartphones, tablets, and other new devices) are being produced, meaning more materials are being extracted from the earth, manufactured into consumer goods, shipped to stores, and sold to consumers.

This production puts carbon emissions into the atmosphere, which causes global warming. These emissions significantly damage ecosystems that take years or decades to recover. The manufacture of these devices also results in toxic waste that harms humans and the environment.

The energy consumption of digital things is an essential part of our overall energy consumption. This is because computers, servers, and other digital services consume large amounts of energy and produce vast amounts of heat. As a result, data centers are expanding rapidly to meet the growing demand for cloud computing and Internet-based services.

Data centers are enormous power hogs for a couple of reasons. First, there’s the sheer amount of space needed for servers—Google alone uses more than 100 million watts of electricity to power its server farms. The other big problem is that heating and cooling these spaces is almost as costly as running the servers. The industry has gotten better at energy efficiency in recent years, but there’s still a lot of room for improvement.

The amount of energy used by data centers varies dramatically depending on their location and the type of companies that are using them. For example, many big tech companies and big telecoms have their own data centers, which they use exclusively to run their websites and services. But some companies rent out computer space in other companies’ data centers to share resources like cooling systems and security with tenants in a given facility.

Our digital lives will continue to grow apace.

The Internet of Things (IoT), wearables, virtual reality, and augmented reality: all of these are part of a growing trend in technology that relies on the Internet and our devices to make it work.

From cell phones to smartwatches, homes to cars, the more we use technology, the more energy we consume. The more digital thing will be around for a while: the number of devices connected to the Internet is increased by 32x by 2020. And that’s just the beginning: estimates project that there will be 50 billion things connected to the web by 2025.

We have seen a trend toward digitalization in just about everything, including transportation, education, healthcare, retail, media, and entertainment. The digitalization of society has presented challenges for ages. For example, there is the issue of companies storing data on servers for more extended periods than was previously done.

The digital revolution is happening, and it isn’t slowing down. We use more and more devices daily to communicate, watch movies, play games, send emails and text messages, and use social media. This technological deluge is making our lives easier but also impacting energy consumption.

It takes energy to make the electricity, and it takes energy to transport it to an endpoint. When you look at the entire delivery process, one estimate puts its total energy consumption at around 40% efficiency—meaning that most of the power generated is lost somewhere in the supply chain.

The digital age has brought many benefits to our lives, but it’s also come with an unexpected downside. Computers and other digital devices have become so ubiquitous that their electricity usage is a significant source of greenhouse gas emissions, driving the climate crisis.

Even though most people don’t think of their computers as having a connection to coal power plants and climate change, they’re entirely wrong. The electricity that runs our gadgets comes from power plants that generate it by burning fossil fuels like coal or oil. When we use our computers, televisions, cell phones, and other gadgets, we add to the total demand for those fossil fuels and their associated greenhouse gas emissions.

Scientists predicted that if we stay on our recent course of business, as usual, our current CO2 levels will be doubled within ten years. It means that every year from now on will produce twice as much CO2 as the year before it did—a trend that is simply unsustainable for civilized life on earth.

The world’s leading nations have pledged to reduce their national carbon dioxide emissions to levels consistent with keeping their climate within a range considered safe by scientists. To meet these targets, they must implement policies that aggressively promote renewable energy sources and electric vehicles while reducing overall energy consumption. However, there needs to be more evidence that such actions are being taken at the national level.

Businesses and consumers alike can help address this issue through digital transformation efforts and by adopting new practices that take advantage of digital technology while reducing their overall environmental impact.

How bad is climate change?

When you look at the facts, it’s hard to believe there’s much debate. The scientific consensus is that climate change is happening and causes by human activity. NASA has said as much, and this isn’t a new or fringe idea: 97% of climate scientists agree that climate change is real. The time-lapse video above shows the retreat of Arctic ice over the past several decades. Some people claim that it’s normal for ice levels to fluctuate like this, but the trend is alarming—and it isn’t even the most severe consequence of global warming.

In short: we’re looking at potential disaster on an unprecedented scale if we don’t do something about it soon.

A few degrees warmer might not seem like a big deal at first glance, but some scientists say that by the end of the century, we could see as many as 300 days per year above 90 degrees Fahrenheit with each passing decade. Rising sea levels will eventually threaten coastal cities, where millions live, and billions of dollars are invested in property. Scientists predict droughts and famines from shifting weather patterns and land degradation from deforestation and pollution.

It’s scary to think about, but it’s our reality: climate change is real, and it’s happening. We already see the effects. Coral reefs are dying, food prices are increasing, and weather patterns are shifting in ways we’re unfamiliar with.

Businesses need to be aware.

Climate change is caused by a cumulative increase in greenhouse gases in the atmosphere. Greenhouse gases are naturally present, but they’ve increased dramatically since the Industrial Revolution due to human activity.

Burning fossil fuels such as coal and oil has contributed significantly to this rise. While cleaner than coal and oil, natural gas is still a fossil fuel and contributes indirectly to climate change by releasing carbon dioxide into the atmosphere through leaks and combustion.

What can data center providers do to minimize their carbon footprint?

We all know that climate change is a big deal, and it’s very real in terms of its impact on our daily lives and the future of our species. However, there are some things that we can do to help slow down or even stop it.

The first step is to measure the problem.

Collecting information is the first step in reducing a data center’s energy consumption. Data centers can provide the total energy used for all the servers and other equipment and how much electricity comes from renewable sources. Knowing this information helps determine what actions can be taken to save energy. The exact steps will depend on the company’s goals, but some potential actions include the following:

IT managers should also educate themselves about their businesses’ carbon footprints. They can then deploy appropriate strategies to reduce them as much as possible. For example, they can shift some workloads to colocation or disaster recovery sites or even migrate some workloads to cloud service providers.

To reduce energy consumption in the future, data center providers should invest in air-side economization systems. These systems use outside air to cool down the servers and are much more efficient than traditional water cooling methods. This move would make a big difference in overall carbon emissions since it reduces the power needed for cooling equipment and eliminates the need for chilled water.

Convenience is one of the main reasons why many people get involved with new technologies. It is easy to see how much energy consumption could go up with the more widespread use of new technologies like self-driving cars or virtual reality (VR).

Several studies have shown how much energy consumption increases when people move away from simple tasks and routine behaviors toward those complex involving activities such as using computers and mobile phones or doing other forms of computing.

Datacenter providers should evaluate their energy efficiency and make necessary changes in their management. This process involves taking the help of experts who have knowledge and experience in this field.

Changes such as using efficient power infrastructure, outsourcing with a green-certified provider, and using low carbon footprint materials are some of the steps that can be taken to reduce the carbon footprint of data centers.