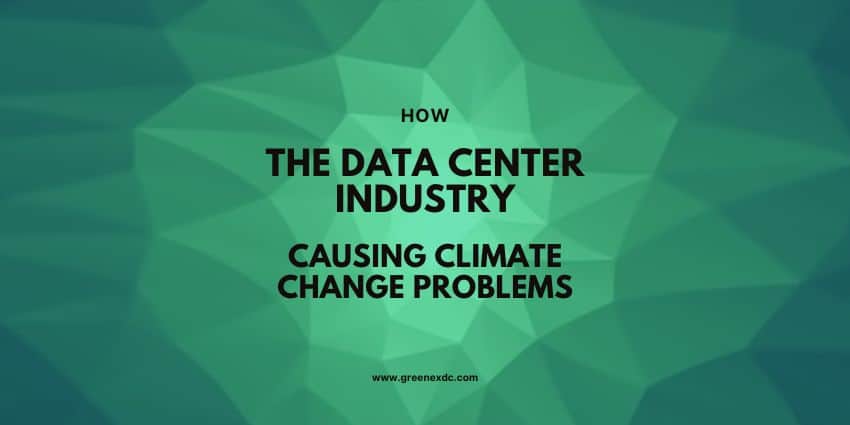 Even though the industry has been around for decades, we’ve only recently realized how much of an impact it has on climate change — and how we can reduce those emissions. In this article, I’ll explain why the data center industry is causing climate change problems in the first place and how you can help reduce your impact on global warming even if you don’t work in tech.

Data centers are on the front line in terms of causing climate change problems globally. The Data Center industry uses more electricity and results in more emissions of carbon dioxide on a global scale than all air travel (source: Greenpeace)

In 2013, the world counted roughly 1 million data centers; by 2020, that number will have risen to just under 3 million. And while they only account for 2 percent of global carbon dioxide emissions today (and rising), by 2020 they could represent up to 5 percent of total CO2 output from all sectors combined—more than aviation does today (4 percent).

Why the data center industry is causing climate change problems?

This is because data centers are using enormous amounts of energy and emit large volumes of heat.

Data centers use more than 2% of the world’s electricity and account for 2% of global greenhouse gas emissions.

Source: Carbon emissions of data usage increasing, but what is yours?

Data centers are responsible for 1% of all CO2 emissions in the world, according to a study by the University of Berkeley. And they are growing fast — doubling in size every four years.

Data center technology is not changing fast enough to keep up with this growth, meaning that we need to find new ways to reduce their environmental impact.

That’s not good news for our climate — but it doesn’t have to be this way. There are steps that companies can take right now to reduce their carbon footprint, which will help address climate change while saving money on energy costs at the same time.

Data centers consume more power than all of India, according to the National Resources Defense Council (NRDC). By 2020, this number could double — reaching about 5% of global electricity production.

The NRDC report estimates that data centers will consume 100 billion kWh of electricity per year by 2020. This is equivalent to the amount that Norway consumed in 2016! According to a recent study conducted by the NRDC and Google, it takes 30 times more energy to cool a server room than it does to power it up for use.

Data centers are also responsible for greenhouse gas emissions. In fact, data centers are among the largest emitters of carbon dioxide in North America and Europe, accounting for 2% and 3% respectively of total CO2 emissions from these regions.

You might not think about the power of a cooling system until it’s too late. But your data center’s efficiency depends on its cooling system, and if your current setup isn’t working as it should, you’re wasting money and energy.

The right cooling system can reduce or eliminate costly downtime, increase hardware reliability and extend the life of your hardware. Here are some ways to improve efficiency with better cooling systems:

Optimize airflow. Airflow is an important part of any data center’s cooling system. Make sure that your data center has adequate ventilation to keep air circulating throughout the space so hot air doesn’t become trapped in one corner.

Choose a high-quality fan that pushes cold air where it’s needed most, rather than just blowing hot air around randomly. You can also consider a more advanced type of fan known as a centrifugal unit, which helps pull heat away from servers and other components.

Use temperature sensors and alarms to monitor whether temperatures rise above normal levels in any areas of your data center — especially near critical equipment such as servers or storage appliances. This way, you’ll know if there are problems before they lead to serious consequences like overheating or even fire damage.

2. Use clean energy sources for power

Use green building materials. Work with a LEED-certified contractor if possible, or at least a contractor who is knowledgeable about environmental issues and how they can affect construction materials.

Use newer hardware. The latest versions of Intel Xeon processors offer significant improvements over previous generations, including up to 50 percent better performance per watt than previous models. They also use less power and generate less heat, so fewer servers are needed for a given workload.

Most data centers are designed to be as efficient as possible, but they can still waste energy and money. The good news is that there are steps you can take to improve your data center’s efficiency, reduce the cost of cooling, and increase profitability.

Your data center may be leaking energy if it doesn’t have proper airflow management controls or thermal management systems in place. These systems help ensure that excess heat is removed from the building so it doesn’t build up inside your server racks and other equipment racks (and vice versa).

If your facility lacks these critical components, some of your cooling units are likely running at full speed all day long — not only wasting energy but also increasing wear and tear on those units as well as potentially damaging components within your racks if temperatures get too high.

Redesign your data center to minimize heat generation. The Uptime Institute estimates that more than 80 percent of all energy consumed by a data center goes toward cooling and maintaining a comfortable temperature for hardware, rather than actual computing. If you’re interested in reducing your energy bill, consider redesigning your facility to reduce heat generation by eliminating non-essential equipment or implementing more efficient cooling systems.

Use renewable energy sources for power and cooling. If you have the option to choose between using traditional electricity or renewable-source power and cooling options, opt for renewables whenever possible. Renewable power sources include wind farms, solar arrays, and geothermal plants — all of which generate zero-emission electricity and don’t contribute directly or indirectly to climate change or air pollution (unless they burn fossil fuels at some point along their supply chains).

The data center industry is a profitable industry with lots of money being invested in it. However, the technology that makes them work without fail is the source of long-term climate change problems.

Today, data centers in the United States alone require approximately 150 billion kWh of power—that is 2.3% of all electricity used by U.S. businesses and homes.. And as more people shift towards digital lifestyles and social networking platforms, these numbers may grow even larger over time.

What’s more, approximately 67% of this electricity is being used to transfer and store data—which means that much could be done to reduce the environmental impact of data centers.

By 2025, the industry will be responsible for 4% of global electricity use and 3.5 million tons of emissions.

To put this into perspective, if you’re looking at how much energy is used by different industries, even the auto industry only uses 8% as much energy as data centers do!

The data center industry is a big part of the problem when it comes to climate change. Right now, we’re not doing enough to address this issue—but that doesn’t mean we can’t change course.

Companies like Facebook and Google have already taken steps toward reducing their carbon footprint. We need more companies to follow their lead and make sure that they don’t contribute significantly to global warming by 2025.

That’s why we build a Green Data Center in Jakarta, Indonesia.